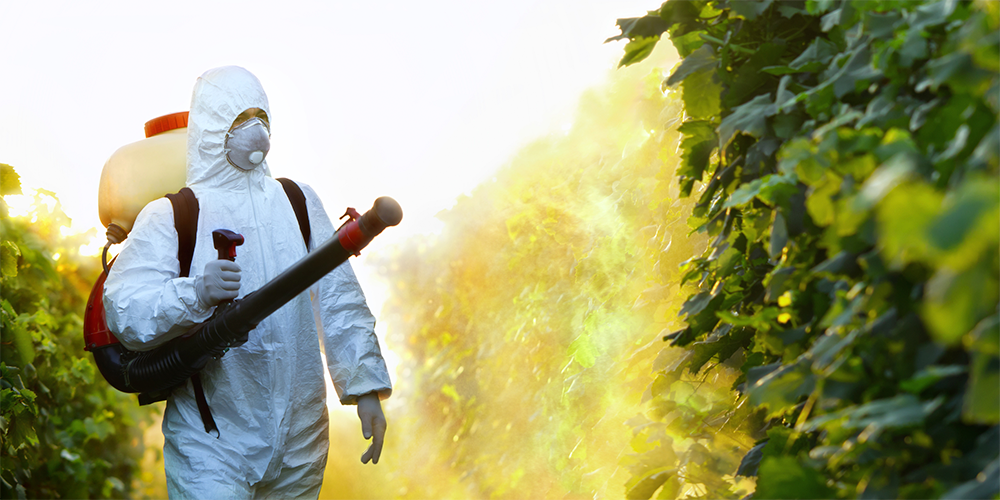 More than 1.8 billion people worldwide engage in pesticide use. Most is commercial while the remainder is for lawn and garden, and in and around the home. According to Michael C.R. Alavanja, Dr. P.H., National Institutes of Health’s Division of Cancer Epidemiology and Genetics, more than one billion pounds of pesticides are used annually in the United States with more than 5.6 billion pounds used worldwide. Although attempts to reduce pesticide use continue, direct or indirect exposure from spray drifts and residues in food and water are common. The U.S. Department of Agriculture (USDA) estimates that 50 million people in the United States obtain drinking water from groundwater potentially contaminated by pesticides and other agricultural chemicals. And children 3-6 years old receive most of their exposure from playing with toys and while playing on carpets.

The impact of pesticide residues on human health is a worldwide problem, which is rapidly growing as exposure can occur through ingestion, inhalation and dermal contact. According to Sara Mostafalou, PhD, Department of Pharmacology and Toxicology at Iran’s Ardabil University of Medical Sciences, and Mohammad Abdollahi, PhD, dean of the Department of Toxicology and Pharmacology at Iran’s Tehran University Medical Center, an enormous body of evidence exists “on the relation between exposure to pesticides and elevated rate of chronic diseases, such as different types of cancers, diabetes and neurodegenerative disorders like Parkinsons, Alzheimers and amyotrophic lateral sclerosis (ALS), birth defects and reproductive disorders.”

The Pesticide Induced Database(PID) includes research on nearly 30 different types of cancer and their link to pesticide exposure, but perhaps the most well-documented are cancers originating in the lymph system, including Hodgkin’s and non-Hodgkin’s lymphoma (Mostafalou & Abdollahi 157). Significant research also supports a link between pesticides and obesity, autism spectrum disorder and attention-deficit/hyperactivity disorder (ADHD). These diseases, disorders and chronic health problems tax corporate, government, community and individual resources by trillions of dollars annually, but with pressure to feed a growing world population what alternatives are available?

The answer may be biopesticides. Begun in the late 1800s with fungal spores used to control insect pests, the first documented case of biopesticide use was by Agostine Bassi, who in 1835 demonstrated that spores of the white-muscadine fungus could protect silkworms from disease (Olson 203). Since then, biopesticide use has continued uninterrupted through modern agricultural history, but to date it has been a small market compared to conventional crop protection. While chemical pesticides are neurotoxic to pests – and often people – biopesticides use other modes of action, including mating disruption, anti-feeding, suffocation and desiccation.

According to the International Union of Pure and Applied Chemistry, the three main categories of biopesticides include:

Since biopesticides tend to pose fewer risks than conventional pesticides, the Environmental Protection Agency (EPA) encourages its development and use. In 1994, EPA established the Biopesticides and Pollution Prevention Division in the Office of Pesticide Programs to facilitate biopesticide registration. Thus far, it has registered more than 430 biologically active ingredients. Based on information from EPA, use of biopesticides in U.S. agriculture has more than quadrupled from 900,000 pounds of active ingredient applied in 2000 to 4.1 million pounds in 2012, the most recent year for data. Nearly 18 million acres are treated with biopesticides, producing crops that are better for people’s health and the planet. Many farmers use them as part of their Integrated Pest Management (IPM) programs so they can rely less on higher-risk pesticides and effectively produce higher crop yields and quality with lower impact on environment and human health (epa.gov).

The Biological Pesticide Industry Alliance (BPIA) currently includes 117 registered companies. Some are top global biotech companies like DuPont, Bayer Crop Science, BASF and Monsanto. While biopesticides comprise only 5 percent of the crop protection market, the industry is growing (Olson 205). The low cost of biopesticide production and quicker development to market process (less than $10 million and four years for development and regulatory approval vs. chemical/synthetic, which requires $250 million and nine years for development and regulatory approval) makes them more attractive to start-ups and small companies with limited research budgets. As a direct result, start-ups in the biopesticide space have proliferated and created a competitive, cutting-edge arena for innovation (Olson 205).

According to EPA, advantages of using biopesticides include: